Mesolithic Period or also known as the Middle Stone Age is archaeological race that describes a self-centered culture that has fallen between Neolithic and Paleolithic period. While the beginning and end date of this era vary depending on geographical location, its approximate date was from 10,000 BCE to 8,000 BCE.

What Distinguishes Each Era to the Next?

If there are two words to describe the Paleolithic Era, it was gathering and hunting. 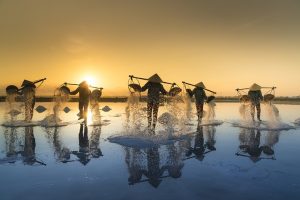 On the other hand, moving forward to the Mesolithic period, it is focused more on the innovations and evolutions of agriculture that has contributed to the growth of villages. Then, the later Neolithic age is described by domesticating animals as well as plants. Some of the Mesolithic people were able to survive by continuing and advancing their hunting skills while others have practiced the early stages of plant and animal domestication.

Then, some Mesolithic have settlements of villages of huts or as what others called as walled cities.

So how they Differ?

What set every culture and period from each other is the primary tool they have been using. Example, Mesolithic tools were mostly composite materials that were manufactured using small chipped stones referred to as microliths and sharpened blades. Paleolithic period uses more of primitive or basic stone treatments while the Neolithic used mainly polished stone tools.